Conclusion of the Maze Runner Trilogy || The Death Cure

While browsing on Goodreads, I realized that an official summary and cover have been posted for the conclusion of James Dashner's concluding book in the Maze Runner Trilogy, The Death Cure! It's an amazing dystopian series that I highly recommend, especially for the guys! I have to say, The Maze Runner and The Scorch Trials were books that kept me on edge until the very last page! It was both thrilling and horrifying! Loved it! 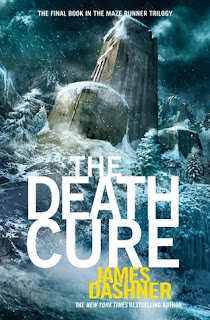 Thomas knows that Wicked can't be trusted, but they say the time for lies is over, that they've collected all they can from the Trials and now must rely on the Gladers, with full memories restored, to help them with their ultimate mission. It's up to the Gladers to complete the blueprint for the cure to the Flare with a final voluntary test.
What Wicked doesn't know is that something's happened that no Trial or Variable could have foreseen. Thomas has remembered far more than they think. And he knows that he can't believe a word of what Wicked says.
The time for lies is over. But the truth is more dangerous than Thomas could ever imagine.
Will anyone survive the Death Cure?
I can't wait for its October, 2011 release!!!
Posted by Carina L. Tai at 10:18 PM