Alex Pettyfer rumored to be cast as Daniel Grigori from Fallen?

Ahh, there's nothing like seeing a giant and seductively posed picture of Alex right when you open up my blog. I should get brownie points for this! Again, I must inform you that I am hyperventilating whilst typing away furiously on my clicky-sounding keyboard. I seem to be doing that a lot nowadays. ESPECIALLY when it involves my future lover, ALEX PETTYFER! So as you might or might now know, Disney has acquired the film rights to Lauren Kate's "Fallen," the first book in an ongoing paranormal series.

"The series is scheduled to be four books long. The first sequel, Torment, was released on September 28, 2010. The third book, Passion, was released on June 14, 2011.[2] Lauren Kate also announced that her fourth book, Rapture, would be released in Spring 2012.
A Fallen movie is in talks[3] and Disney has optioned the rights to Fallen. Since the Fallen series is a four part series, Disney made sure that they obtained rights to all four of the books in the deal.[4] Mark Ciardi and Gordon Gray will produce the movie." 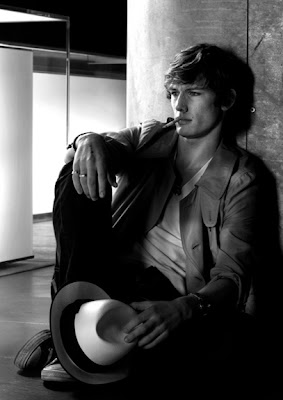 Okay, so since I've already done oodles of foreshadowing in both the title and first paragraph, I'll just give it to you straight. ALEX PETTYFER has been (very strongly) rumored to be playing the sexy bad boy angel, Daniel Grigori! Take a moment, fan yourself, and stay conscious! I KNOW IT'S ALMOST TOO GOOD TO BE TRUE! Although nothing has been confirmed yet, IMDB has confidently suggested that Alex P. is already going for the role alongside Elizabeth Gillies (Jade from Victorious) who will be playing the gutsy Arianne Alter. Lucy Hale has also been suggested to portray the coveted female role of Luce, but again, nothing is confirmed.


What do you think? Is Alex's body, personality, style etc. commensurate with that of the stunning Daniel Grigori's? One thing's for sure, I'm getting FRONT ROW SEATS to see that movie!
Posted by Carina L. Tai at 11:38 PM