Summary: Luce would die for Daniel.

And she has. Over and over again. Throughout time, Luce and Daniel have found each other, only to be painfully torn apart: Luce dead, Daniel left broken and alone. But perhaps it doesn’t need to be that way. . . .
Luce is certain that something—or someone—in a past life can help her in her present one. So she begins the most important journey of this lifetime . . . going back eternities to witness firsthand her romances with Daniel . . . and finally unlock the key to making their love last.
Cam and the legions of angels and Outcasts are desperate to catch Luce, but none are as frantic as Daniel. He chases Luce through their shared pasts, terrified of what might happen if she rewrites history.
Because their romance for the ages could go up in flames . . . forever.
Sweeping across centuries, PASSION is the third novel in the unforgettably epic FALLEN series. 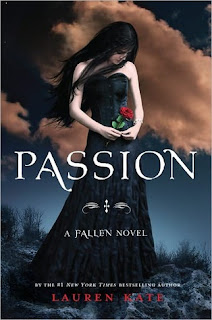 I'm actually quite torn! This book is surprisingly difficult for me to review, in a sense that there were several elements I absolutely loved, and others that I disfavored. In the end though, I think the pros and cons balance out to produce the lyrical conundrum that is Passion.

PROS:
I would be lying if I didn't admit that Passion was a poetic blend of love that transcends time. Contrary to other strongly voiced opinions regarding Kate's writing, I found her style to be anything but prosaic and tiresome. From the first page I was ensnared by the rich and vividly depicted landscapes spanning millions of years and cultures. In fact, I commend Kate for her bold plunge into the paranormal and historical. She did just enough research to give the reader a sense of cultural diversity without making the entire novel sound like a history lesson.

I've been ardently curious about Luce and Daniel's past interactions since the beginning of the series, and I have to say, this book has certainly quenched my acquisitiveness. The numerous lifetimes and encounters revolving around this couple were filled with budding intensity and surprising tenderness. I loved how Daniel and Luce never ventured past deeply passionate kisses, but were still able to capture all the finer points of an emotionally concupiscent romance.

Moreover, I found the premise of Daniel's character more evocative than ever. Seeing him eternally devoted, selfless, and passionate gave him a new dimension as a character. Witnessing his never-ending suffering over the endless millennia was almost too distressing to repeatedly endure for Luce, and me as the reader alike. The relationship that Lauren Kate weaved between Luce and Daniel is something truly unique. An angel and a mortal: doomed to love and to lose each other for eternity. It's really quite beautiful.

CONS:
There were some constituent elements in Passion that not even elegiac prose can mask. After I flipped past the final page, there were still many unanswered questions that left me feeling unsatisfied. For example:

1. How can Daniel look ethnically different in every one of Luce's lifetimes? He is an immortal.
2. How exactly do the announcers work? The descriptions were achingly vague.
3. How did Luce become so powerful at time travel? It was rather convenient.
4. Why are Cam, Gabbe, Roland, Ariane, etc. still hanging around Luce and Daniel? It's like they have nothing else to do.
5. What was the point of Shelby and Miles coming along?
6. If Cam and Daniel are "enemies" why do their interactions seem neither negative nor positive?
7. Other than the usual angel crew, where are all the other angels? Isn't this supposed to be a huge war?
8. Why can Luce cleave so easily, while Daniel finds it torturous?
9. Shouldn't interacting with one's past self somehow alter the future?
10. What determines whether Luce dies or not? Is it Daniel or is it Luce?
11. WHY IS LUCE STILL ALIVE IN THIS LIFETIME?
12. WHAT MAKES THIS LIFETIME DIFFERENT?
13. HOW DID DANIEL PICK LUCE? If he was condemned to love, why is it that Luce is the one he loves over and over? He was sent spiraling down from Heaven, and after that, there must have been a time when he was "looking" for love before he was doomed to experience it over and over in the most painful way.

So as you can see, many unanswered questions were storming through my mind. Through the endless time travel, many gaping holes in the plotline simultaneously swelled open thus creating a sense of confusion. There is no doubt that Passion was written quite differently from it's predecessors , but it wasn't necessarily for the better. The constant time travel seemed to be an aimless cul-de-sac resulting in an abrupt and immanently lacking ending. When Luce finally reunited with Daniel, it didn't seem as if she grew to understand their relationship on a deeper level, in fact, she seemed slightly more self-centered than ever. The ending, or rather, the epilogue was by far the most disappointing section. There was no transition between Luce's time traveling excursion and the finally continuing plot. Thus, I felt the lack of gradual progression into the "bigger picture," completely vanquished the point of the story.

OVERALL:
There is no denying that I am enchanted by the rich and picturesque quality of Lauren Kate's writing. She executes her stories with ultimate finesse through interlinking the vivid layers of her characters' past lives. However, there are simply some preeminent questions that cannot be left unanswered, especially when the plot line is growing ever more complicated. Although my perception of the quandary that is Luce and Daniel's saga is far from holistic, I most wholeheartedly look forward to concluding book.