Exclusive Q&A With the Cover Artist of WITHER 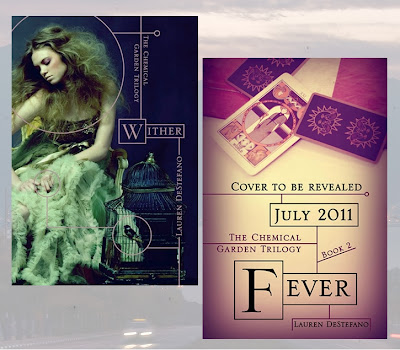 Q&A With Lizzy Bromley: Cover Designer of Wither by Lauren DeStefano
Source: http://alismith.com/blog/ (CHECK THEM OUT! THEY'RE AMAZING!)

Tell us about the concept behind the cover design … what do you hope it conveys to readers?

When I read WITHER I fell in love with the poetic style of Lauren’s writing. The story is told in such lyrical and beautiful language. I wanted to give the cover that same kind of poetry, an image that was more atmospheric and intriguing than literal.
How did you conceive of the idea for the WITHER cover?

At the start I had a very different idea for the cover. I went through many rounds but was having trouble getting it to click. Then one day I was riding the elevator with a colleague from our sales force here at S&S, and I was telling her about my struggles with the current cover. She said, “Well, you have to show the girl, right?” and my heart skipped a beat.  My first concept did not have the girl and when she said that I realized that that was why I was having so much trouble getting the concept to work. Rhine needed to be shown.
What other ideas were tossed around?

I loved Rhine’s character so much that I was really hesitant to show her at first. I liked the idea of leaving her up to the reader to imagine. My initial concept focused on showing the surreal and too perfect garden at the Vaughn mansion.  I was going for something sparkly and pretty, but also dark and unsettling at the same time. It proved very difficult to convey those opposing ideas and the more I worked on it the more I realized I needed to step back and try something totally different.
We know work has already begun on the cover for book two … what can you tell us about that? How does it relate to the cover of book one? How is it different?

The cover for book 2 has already been photographed and I’m so excited about it. We were lucky enough to have the same team as we had on book 1: the photographer (Ali Smith), the hair stylist (JSterling), and our fabulous model (Kristina O’Connor)  It definitely echoes the style of WITHER but it has a life of its own. All I can say is that there is a to-die-for gold sequined dress.
(*Note from S&S: we will be unveiling the cover this summer, stay tuned!!)
Posted by Carina L. Tai at 8:41 PM