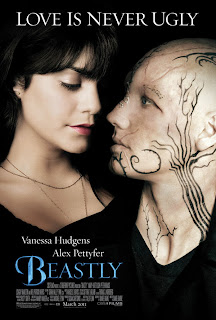 
Synopsis: Kyle Kingsbury has it all. He's confident, wealthy, and not to mention gorgeous. But all good things must end, and when Kyle offends a disguised witch, she curses him. He turns into a hideous and bald tattooed rendition of himself (although, I still think he's somewhat charming) and has one year to find a girl who loves him for his heart and not his appearance to lift the curse.

As much of a book addict as I am, I'm also a HUGE movie watcher. So today, I dedicated 6 hours to three movies. The Adjustment Bureau (which was AMAZING), No Strings Attached (FUNNY!!!), and Beastly... Let me start off by saying that the book was alright. Possibly a 2.5 out of 5, since the storyline wasn't very captivating. I'm sad to say, that the movie wasn't much better. There was absolutely no chemistry between Vanessa Hudgen's character (Lindy) and Alex Pettyfer's (Hunter/Kyle). The dialogue was AWFUL! ABSOLUTELY AWFUL! It was cheesy and I felt like I was watching a low-budget soap opera. It didn't sound natural at all, and as much as I love Alex Pettyfer, his acting was a disappointment. The scenes were choppy, and I didn't feel the slightest romantic spark between the two. Vanessa's character always ends up killing the mood by saying "Rad" one too many times, or talking about baboons while Hunter/Kyle was trying to hint his love for her. It really bothered me since it took away from the overall "elegance" of their courtship. The effects were poorly done, and the costumes were a bit tacky.  There were significant differences between the film and the novel. One being that in the book, Kyle is transformed into a big furry beast instead of a bald guy with tattoos. In conclusion, I suppose Beastly would be a decent Friday night Chick-Flick to see on DVD, but it's definitely not a movie worth going to the theatre for.