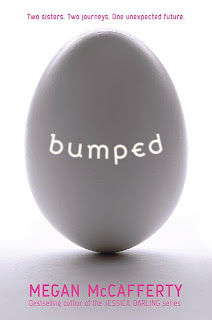 Official Summary: When a virus makes everyone over the age of eighteen infertile, would-be parents are forced to pay teen girls to conceive and give birth to their children, making teens the most prized members of society.

Sixteen-year-old identical twins Melody and Harmony were separated at birth and had never met until the day Harmony shows up on Melody’s doorstep. Until now, the twins have followed completely opposite paths. Melody has scored an enviable conception contract with a couple called the Jaydens. While they are searching for the perfect partner for Melody to bump with, she is fighting her attraction to her best friend Zen, who is way too short for the job.

Harmony has spent her whole life in religious Goodside, preparing to be a wife and mother. She believes her calling is to bring Melody back to Goodside and convince her that “pregging” for profit is a sin. But Harmony has secrets of her own that she is running from.

When Melody is finally matched with the world-famous, genetically flawless Jondoe, both girls’ lives are changed forever. A case of mistaken identity takes them on a journey neither could have ever imagined, one that makes Melody and Harmony realize they have so much more than just DNA in common.

My Review: You have to take my word when I say I've read A LOT of books; but, none have left me feeling the way I did about Bumped. The emotion was an even mix of enthrallment, uneasiness, and amazement. The notion of living in a world where teenage girls are highly valued because of their reproductive capability downright scares me, yet intrigues me at the same time. The concept isn't one that has been thoroughly explored by other authors, and McCafferty is either crazy, or a genius. Possibly a combination of the both. 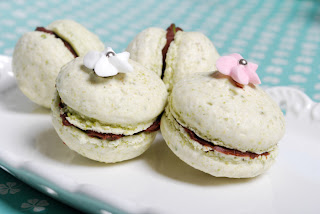 Unlike many other dystopian novels I've read, Bumped did have a rather lighthearted feel to it. I loved how the personalities of both Melody and Harmony complimented each other, and their conversations were simple enough to understand, but suspenseful enough to keep you guessing. Towards the end though, their switching point of views grew a little irritating and the stories just overlapped one another making it a jumbled mess. The relationship dynamics were mediocre, so for all you romance junkies out there, don't be too disappointed. To put it bluntly, I felt like I was witnessing a colossal chick fight. A lot of McCafferty's terms were hard to grow used to, and they flew right past me most of the time. The story, for the most part, encapsulated an interesting concept, but the author's writing style was surprisingly difficult to follow and the language was just a little bit crude although I thought that illegal condoms were hilarious! Additionally, the ending felt completely cut-off and unsatisfying. I know there's been a lot of positive feedback floating around for this book, and I agree with about 75% of it.

Rate & Recommend: Hmm, I rate this book a 3.5 out of 5. It's not a dystopian must read, but it is entertaining. The language and terms are a bit hard to swallow, but it doesn't take away from the undeniable creativity and passion McCafferty put into constructing her futuristic world. I look forward to the sequel, but it's not going to be a priority on my list.
Posted by Carina L. Tai at 11:46 AM